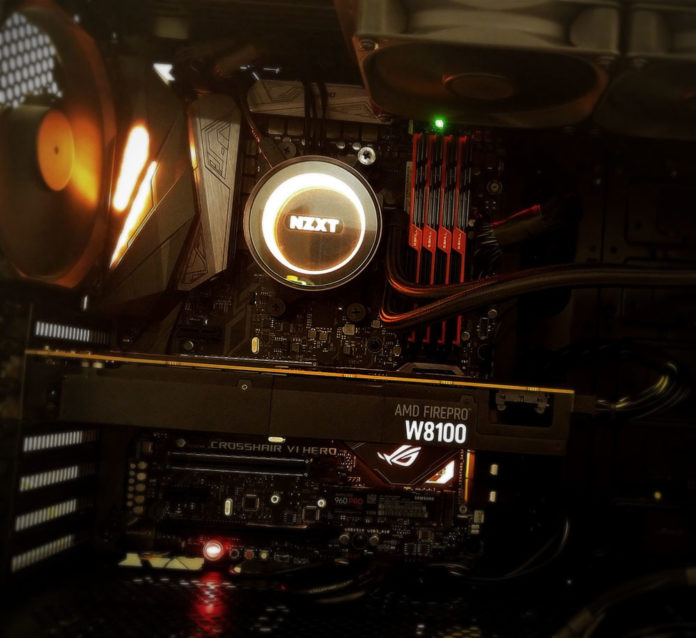 Hello my rendering friends, now that the hype has passed a bit, and I’ve had some time to play with my newly assembled Ryzen build, it’s time to give you guys a recap of my experience so far.

Basically the idea was to replace my old home PC with something that has top of the line parts throughout, so I can experiment with 3d stuff without having to shout ‘damn you, you slow piece of crap!’ all the time. I don’t live alone after all, so it’s not overly socially acceptable.  I won’t go deep into component selection in this post, but I will say that I’m not a huge fan of workstation GPUs given the extremely poor price/performance ratio, but last year @ EUE, the nice people who make the Radeon ProRender gave me this one as a reward for asking the right question at the right time, so it basically has the performance/price ratio of infinity [well, or ‘division by zero’, depending how you look at it]. The rest is pretty straightforward for a high end PC. If you check the prices of this stuff, you may find yourself wondering: “Damn, this is quite expensive. Ain’t Ryzen supposed to be a cheaper alternative to Intel?”

In short: YES, but while this specific build may be kinda pricey, it’s because these parts are totally teh pro, they are also color matched and look srsly teh pro as well. Not a factor in a workstation for sure, but hey, this is my home PC. It proudly sits on my table. It’s gotta look sweet. And it does. Yours doesn’t have to look that good. Your choice.

I’m not being [too] serious here, of course. An Intel system with these same parts but an i7 6900k and appropriate mobo would be more expensive anyway. We’ll get to the pricing options at the end though, but first…

Let’s put the Zen in Ryzen

I already noted that the Ryzen R7 series launch could have gone more smoothly, but I think the 5 and 3 series which are coming later this year [R5 as soon as April supposedly] will have more luck with that. By then the RAM and BIOS stuff will hopefully be sorted out. But here’s what’s been going on with the R7 early adopter experience in a nutshell:

It may sound bad, but don’t judge the CPU before you read everything though, I’m just trying to paint a clear BS-free picture here.

I’ve explained some of the differences in CPU architecture in the previous post so I’m not gonna repeat myself, but the CCX modules in Ryzen deserve a short intro before we get to the juicy stuff. As can be seen from one of AMD’s official slides, a CCX is made of four cores. Which means a Ryzen 7 CPU has two of those packed inside to give us 8 cores. If you’re wondering why they don’t just pack all the cores in a single unit and be done with it, this kind of design is easily scalable, so the total number of cores can varied by just adding or removing CCX modules.

The CCX modules are connected via something AMD calls the ‘infinity fabric’ [who would’ve thought a bunch of PCB traces could have such a cheesy but still cool name].

The Intel equivalent of this is the ‘ring bus’ [which doesn’t sound remotely cool in comparison, more like something Bangbros would think of, but then again I suppose poor Intel ain’t got enough money to have a ‘cool name department’ anyway. Before you start thinking I’m bashing Intel here for no reason, lemme just mention briefly I absolutely despise any product name with the format i{something}. That naturally includes i3, i5, i7 and similar. It’s probably the most overused naming convention in the history of mankind alongside  {something}Cola, and thus nauseatingly boring to even look at anymore].

Basically, such an interconnect is necessary in all CPUs which have multiple core modules, so the cores in different modules can ‘talk to each other’ if you will. The tricky part about the infinity fabric though is that its speed is directly related to the speed of your RAM – it runs at 1/2 the RAM speed to be exact. Thus, if RAM speed increases, CPU performance will increase as well. Note that this ain’t a magic bullet – what happens is that the latency in core to core communication lowers, so the actual performance gain will depend on how any given app actually uses the available CPU threads.

But, in order to squeeze the max performance out of your CPU, you need to get your hands on the fastest RAM you can***. On that note, depending on the motherboard you choose, as things are now, you might have problems getting the RAM to run at said very fast and awesome speed. This is something that will be resolved in future BIOS updates. Or so they said.

*** If you care about high RAM speed – check the motherboard QVL lists BEFORE you buy your RAM. I can’t stress this enough. RAM compatibility on Ryzen is currently shaky at best, so you’ll be better off with something someone other than you confirmed works properly, while not using your money for it. You’re welcome.